Hyperforce II: Of Madmen and Megalomaniacs 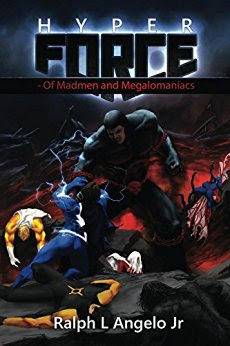 Enemies All Around Them!
A Team in Turmoil!
RLAngeloJr.com
Hyperforce II:
Of Madmen and Megalomaniacs
by Ralph L. Angelo Jr.

Hyperforce accomplished much in its first year together. But now, with one of their most powerful members gone, the team must try to unravel the machinations of their foe, ‘Mind Master.’

But Mind Master is not the only threat they must face. Because a new foe (or is he a friend?) has risen from the sea and is seeking out the team of superheroes. But what does he actually want from them? Does he seek their aid? Or does he have more nefarious plans in mind?

The adventures of the nascent super-team continue as villain after villain, one more powerful than the last, attack the team again and again.
But their newest, most mysterious foe may be more than they can handle. A hulking grey skinned brute with strange and terrible powers may signal the end for Hyperforce. A monster whose battle cry of ‘Kneel and know Dyspair!’ would send an involuntary shudder down the spine of the bravest of men.

With not only their own lives, but those of people all over the world at stake, will Hyperforce be enough to stop their terrible new enemy? And what of the traitor and spy in their midst? Will he be discovered in time?
Find out the answer to all of these questions within the pages of ‘Hyperforce II: Of Madmen and Megalomaniacs.’

About the Author
Hello my friends, my name is Ralph L. Angelo, Jr. I am the author of several books that are available here on Amazon in both kindle and paperback versions. They range from epic fantasy (The Crystalon Saga), Sword and Sorcery (Torahg the Warrior)to Sci-Fi/Space Opera (The Cagliostro Chronicles)and Super-hero adventure (Hyperforce)as well as terror (The Halloween Terror of Weatsboro) to non-fiction (Help! They're all out to get me! The motorcyclists Guide to Surviving the Everyday World)

I was also voted 'Best New Author' in the 2014 'New Pulp Awards'
So check out my novels, I'm sure you'll find something that you'll like. My Cagliostro Chronicles series is a best seller here on Amazon and has gained quite an audience. You might want to start there.