Game Over by Derek Edgington 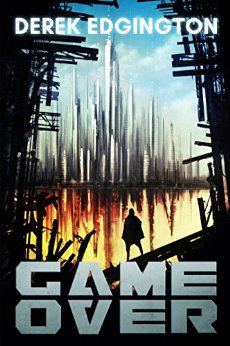 “A reluctant hero sent to save the human race.”
New Sci-Fi Epic Fantasy
.99 cents through September 14!
derekedgington.com
Game Over
by Derek Edgington

“Game Over” takes place in the distant future, in a place far, far away from the planet we call home, in the virtual universe called Elisium.

Imagine a society freed from crime and illness, one sustained by a single, eminently logical system that was designed to seek the ultimate perfection of humankind. The Sibyl System seeks the elusive potential for perfection residing within humankind, and, at some point in time, becomes its greatest enemy.

Now imagine that a reluctant hero is called— no, sent— to save the remnants of the human race that reside in the toxic wastelands that make up what was once proudly called Earth by its inhabitants.

Ekko Everlasting is thrust into the world of the game, “No Life,” but without any corresponding memories that might motivate him to value any one universe over the other… Ekko’s immediate concerns dealt with saving his own skin and regaining his lost self— exclusively in that order— not saving one universe, let alone two.

How would you play out the role dealt to you by fate?

Biography
I'm Derek Edgington, and I graduated from LMU in LA on May 7, 2016 with a Bachelors in Business Administration: Entrepreneurship. Sarcasm is my stock and trade; I'm a practitioner of all shades. Pretty much all the way from Fourth Grade onwards, you could find me with a book in hand. Ironically, this was a few years after my parents were told I had a reading disability. In high school I eventually traded in print books for ebooks, mostly because it was sneakier and could be read more easily during class. Although I self-published two books before I went to college (The Seven & Leviathan), I didn't publish any full-length titles during my time in University. Immortal: Curse of the Deathless marks my return to the publishing world.