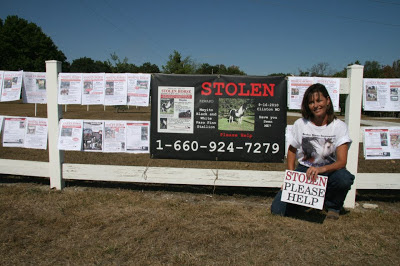 The morning sun shines softly over Clinton, Missouri, USA.  Bernice McClellan drives the eight miles from her farm to the pasture where her three dreamy stallions are grazing. The stallions are in a leased pasture that can be seen and accessed from the main road. Everyday Bernice feeds the stallions first. After feeding her stallions, she then feeds her herd of mares located another three miles off the main road. Finally, Bernice travels home to care for her geldings and yearlings. But today Bernice’s routine would be forever interrupted. 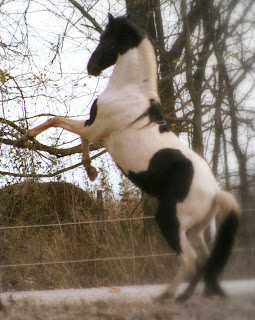 It is early afternoon on September 17, 2010.  Bernice is driving to collect Mayito Carbon Copy, her beautiful Paso Fino stallion, to breed a ready mare.  Upon arriving at Mayito’s pasture, she is stunned to find that he is missing! Bernice’s world is instantly changed. She says, “I have a small place, five acres divided into three sections. I had all the stallions in one pasture. Mayito, my beautiful 16 year old black and white Paso Fino stallion; Dream Weaver de Holandes, a 10 year old Dunalino Paso Fino stallion; and SV’S Shadowfax, a 4 year old Perlino Paso Fino. The pasture is right on US Highway 7, so the horses were able to be seen from anyone passing by.”

Mayito was stolen in the middle of the night. Whoever stole Mayito probably did not know he was a stallion.  The perpetrator would have been attracted to Mayito’s flashy black and white markings, flowing mane and spirited disposition. The thief may have been contemplating taking all three stallions, but approaching and catching a stallion in the dark would have been tricky. Bernice says, “Most people don’t keep a bunch of stallions together in one pasture.  Since there were no mares around, the stallions all got along great. All of my horses are easy to catch and love people. If you catch one and the others come up too, the one caught feels trapped.  So, I think when the thief caught Mayito, Dreamer and Shadowfax came up as well, and Mayito squealed. It scared the thief and he just took Mayito and got out of there.  He probably discovered that Mayito was a stallion afterwards, and I don’t think they realized that he was 16 years old. I think the thief was looking to make a quick buck.” 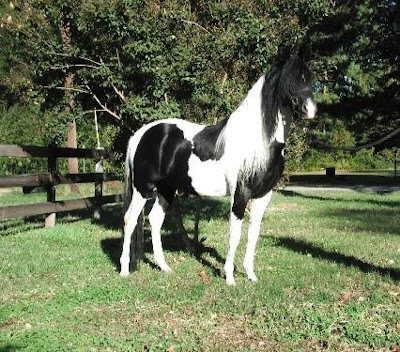 Bernice immediately called local authorities and filed a report with her local Sheriff.  She explains, “I made flyers and had my son and his friends hang them anywhere they could, in all the surrounding towns. I sent out emails to all my friends who told me to contact NetPosse.”  NetPosse is a group of dedicated volunteers who maintain a website and network to help find lost, missing or stolen horses. Early on, Mayito was spotted on nearby trails by other riders. Over time, sightings have been reported less and less.  The last sighting of Mayito was on September 19, 2010.  Mayito had been seen on the Lead Mine Trails, about 20 minutes from Lebanon, Missouri. Riders alerted Bernice to the sighting, but it was another dead end.

After months and years of searching, Bernice has not been able to locate Mayito. Bernice explains, “When Mayito was stolen from me, it devastated my life.  Before he was stolen, I had 26 head of horses. I have gone from owning and breeding a wonderful breed of horse, something I loved doing, to selling all but just a few so I can keep them close to me. I weighed 117 pounds when they stole my boy, within three weeks I had dropped to 96 pounds. I could not eat or sleep.  I lived and breathed finding my boy.”

Bernice has a lot of horse history.  She has been a horse-lover all of her life.  Bernice says, “I have been riding horses since I was a little girl; my first pony at the age of six.  My sister and I would ride from sunup to sundown.  We lived on our horses.  We rode bareback because it took too long to throw on a saddle.  We would take lunch with us and head out into the woods, riding all day. Even if it was raining we would lead the horses into the barn and play with them all day, or until it quit raining.  After school I moved away, didn't have horses again until I moved back close to home in 1996.  We had Quarter Horses at the time and my daughter joined the MoKan Youth Rodeo.  I began training horses for friends.  In 2002 I worked a horse for my friend Joe.  You could not touch the horse’s head or the horse would strike at you.  Within two weeks I had the horse loving to be touched and he rode like a dream.  That was my first experience with Paso Finos.  After that, I decided that was the breed for me.  I sold or traded most of my Quarter Horses for Paso Finos. I’ve been breeding and raising Paso Finos ever since.”

Mayito was Bernice’s most loved stallion.  She says, “Mayito was very well-mannered.  He had sired several foals, giving them his long, luxurious mane and forelock, his outstanding disposition and his wonderful Paso Fino gait.  He was not homozygous for pinto; only if breed to the right mare.  He would take your breath away watching him.  He would arch his neck and hold his head up high.  His front legs came up so that you thought they were going to hit his chin.  He had a majestic presence about him, yet he was very sweet to handle and loved being groomed. He was my dream horse.”

Today, Bernice helps others find their lost, missing or stolen horses. She works diligently with NetPosse in teaching others how to protect their family horses from being stolen.  Bernice says, “Most of the people I talk too have no clue that horse theft is such a big deal. A thief doesn't just steal a horse; they steal a part of us, a member of our family.  There is not one day that goes by that I don’t run to the computer to see if I have an email from someone who might know where Mayito is. I know as time goes on its less likely I’ll find Mayito.  He is 18 years old now.  They say things happen for a reason.  Maybe mine is to help other victims.  Maybe it is to get the word out about horse theft. They say hope can be paralyzing.  I am here to tell you it IS paralyzing. I will never give up my search.  I long for the day I can wrap my arms around his neck and run my fingers through his long mane…and never let him go.”

If you have any information on Mayito,
please contact Bernice via the following:
http://www.netposse.com/view_report.asp?reportid=129
http://www.youtube.com/watch?v=wVGaGJYGkZo
© Gina McKnight is a freelance writer from USA.10/15/12  http://www.gmcknight.com 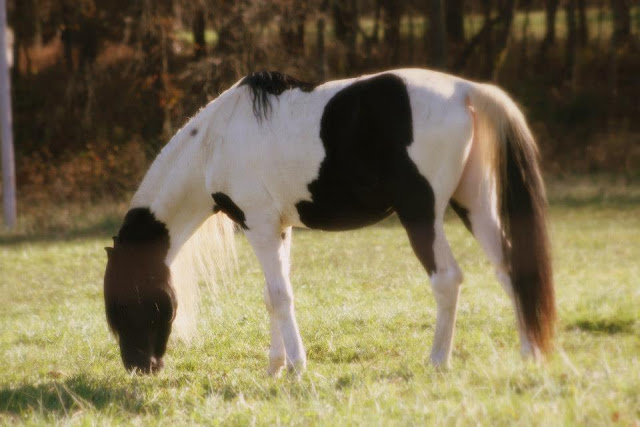 Email ThisBlogThis!Share to TwitterShare to FacebookShare to Pinterest
Labels: Equestrians from Around the World, Horses, International Horses, Selected Archived Freelance ©