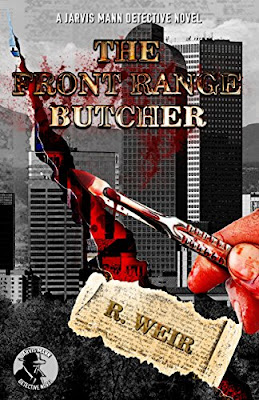 Pre-sale available now on Amazon4.99 or FREE on KINDLE UNLIMITEDPre-Order for a chance to win $25 Amazon Gift Card!

JARVIS MANN PI IS BACK IN HIS MOST DANGEROUS CASE YET!!

Twenty-two years ago, the slayings began, a new body nearly every month, front page news for all to read. Gruesome in nature, the victims nearly all female, the killer terrorizing the residents of Colorado’s biggest cities. Until one day the murders stopped leaving no clue, or closure. No one knew who he was, his motive for slaughtering them, and why the urge to kill suddenly ended.

Now, more than two decades later, the urge has resurfaced. Carved remains of loved ones left to be found, lives of families ruined, the slayings echoing an all too familiar case from a past once forgotten. Bold headlines return to the local papers, the police and FBI still just as helpless, even with today’s modern advancements. Has the killer resurfaced again? Why did they disappear for so long? How many more will brutally suffer the same horrendous fate?

Hired to find the serial killer, private detective Jarvis Mann digs deep, fighting FBI resistance, with life threatening danger lurking around every corner. His cunning leads to a man he must match wits with, a man the F.B.I can’t touch. Interrogating to get into his psyche in an all-out attempt to stop the insanity and bring him to justice. Cold and calculated, intelligent and coy, the man, wheelchair bound, holds the answers and the secrets. For he is the only one who could be the evil manifestation of: The Front Range Butcher.

Can Jarvis outwit such a mastermind, or has he met his match?

Check out the other Jarvis Mann Detective Stories:

The Case of the Invisible Souls: A Jarvis Mann Short Story #6
https://www.amazon.com/dp/B071SJPFTZ

I live in the Mile High city with my wife, daughter and dog, where the Rocky Mountain High isn’t always achieved with an herbal substance. When not glued to the computer for work and writing, I relax by enjoying the outdoors; playing tennis, travelling in our motorhome and riding a motorcycle wherever the wind takes me. My writing beckons back to the days of detectives and dames, but with modern plots and twists. PI Jarvis Mann is tough, resourceful and a man with as many faults as virtues. HIs oddball sense of humor is much like mine, though I’m not nearly as tough and fearless as he is. Though no evil stands a chance against my written word!

Be sure visit my author webpage, and to reach out on FaceBook, Google+  and Twitter; for I love to hear and interact with readers of my stories.