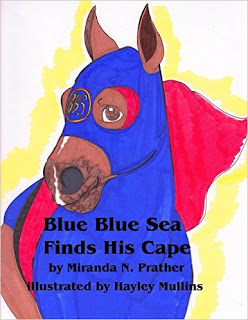 Although he was no American Pharoah on the track,
Blue Blue Sea finds his "cape" in retirement.

Blue Blue Sea was born of racing royalty in Paris, Kentucky, at Elm Tree Farm. He trained to become a racehorse, running at a variety of tracks, but never was able to achieve fame and fortune. In 2004, Miranda N. Prather found him via the CANTER website and took him home to be her jumping horse. In 2006, he became very ill and nearly died. He was diagnosed with a disease like Crohn’s and given 1-2 years to live. Miraculously, with diet changes, Blue Blue Sea went on to live another seven years, becoming a trick horse and inspiring thousands of people around the world via his Facebook page. His story has especially resonated with those facing serious, long-term illnesses. Blue Blue Sea Finds His Cape tells the story of this real-life superhero horse and is the first in a planned series that details his adventures.

Hi, thanks for posting about the book! Happy to announce that the author will be at a book signing this Friday at Pimlico Race Course, home of the Preakness Stakes!

Thank you for posting about our book! So happy to announce that the author will be at a book signing this Friday (May 20) at Pimlico Race Course (home of the Preakness Stakes)!

Awesome! Have a fantastic book signing event at Pimlico!!! Wishing I could visit with you there! Please feel free to return to Riding & Writing and share your events, new book releases, a book excerpt, or something horsey! Best Wishes!

Thanks, Gina, we wish you could have been there, too. It was a simply great event!