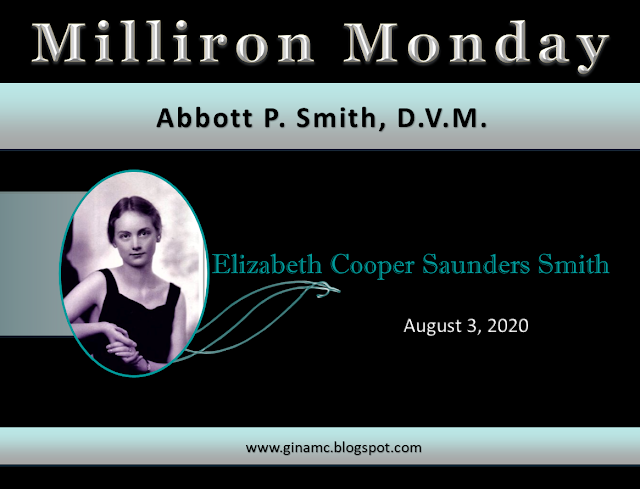 Abbott "Pete" Smith, D.V.M.
June 16, 1938 - February 22, 2010
Welcome to Milliron Monday where every Monday we celebrate the legacy of Pete Smith, D.V.M., and  Milliron: Abbott “Pete” Smith, D.V.M. The Biography (Monday Creek Publishing 2017). A graduate of Colorado State University and a well-known veterinarian in southeast Ohio, Dr. Smith continues to motivate and inspire.
This month we remember the life of Dr. Smith's mother, Elizabeth Cooper Saunders Smith. To begin, I am sharing her obituary which provides insight to her life as a wife, mother, writer, and much more...

Born Elizabeth Cooper Saunders in Creston, Mont., May 22, 1912, Elizabeth was the fourth and last child of Arthur and Sarah Hix Saunders.

Her father and engineering partner Walter Cooper had begun homesteading in Creston in 1911, clearing a stump ranch on Echo Lake. Elizabeth rode her horse to school while growing up there. The family boarded horses for summer people on Echo Lake, including the Buds of the famous Bud Liner railroad car.

Elizabeth's father moved the family to Kalispell so that Elizabeth could attend Flathead County High School. Leaving his oldest son Harry to work the farm, Arthur returned to his engineering, working on county and city road building. He was later hired by the Department of the Interior to help build a road in Glacier National Park. That road came to be known as the Going to the Sun Highway, the first mountain road to be designed by a landscape architect rather than an engineer, setting a new standard for road building in national parks. As he did his entire life, Elizabeth's father kept a daily journal of the road construction, the only record of the construction of that famous road. The family eventually gave the journal to the Montana Historical Society.

In 1929, Elizabeth's father was hired by Standard Oil of California to frepresent its cold asphalt product, bitumuls, in the East. The family moved back to Arthur's home state of New Hampshire and settled in Durham where Elizabeth and her older sister Louise attended the University of New Hampshire. By that time, her other brother, Bill Saunders, had gone off to Annapolis, followed by a prestigious career in the Navy. After Elizabeth's first two years at UNH, her father moved the family to Lewiston, more centrally located to his territory, where Elizabeth enrolled in Bates College, from which she graduated in 1934.

At Bates, Elizabeth met fellow classmate Abbott P. Smith of New Bedford, Mass. They married on Dec. 7, 1934, in Cambridge while Abbott was studying business at Harvard. They returned to Maine, where Abbott developed several businesses in the Portland area, from his real estate company, Maine Lakes and Coast Realty, to owning WMTW radio station and selling life insurance.

Abbott developed the life insurance market among farmers, loggers and fishermen, a market that had been overlooked by insurance companies serving the larger business community. Their five children were born while living in New Gloucester, Yarmouth and Freeport. Their last Maine home in Freeport was a 160-acre farm on Casco Bay, currently the sales office for Wolfe's Neck Farm organic beef and the location of the popular Recompense Shore Campsites. At the recommendation of Abbott's doctor, the family moved in 1952 to Colorado, where Abbott worked for the Silas Dean Co., selling sales training programs.

Elizabeth began her first work off the farm and out of the house at that time. Using her talent for writing honed as an English major at college, she began her career as a secretary.

In 1956, the family moved back East where Abbott worked for International Harvester in Boston and Elizabeth worked for nearby Polaroid. In 1959, they moved to New York City, where Abbott eventually started his own executive search company, Abbott Smith Associates. Elizabeth continued her career as secretary at Bobbs Merrill Publishing, then Young & Rubicam Advertising.

In 1962, Elizabeth and Abbott bought a 90-acre farm upstate in Millbrook, N.Y., from which they commuted to NYC for several years until settling in Millbrook full time in 1972. Abbott continued his executive search business in Millbrook until selling to his employees in 1985. Elizabeth was a longtime member of the Millbrook Garden Club for which she wrote their newsletter for many years. She also wrote a column, My Side of the Street, for the Millbrook Round Table for 12 years. In 1996, the family moved Abbott, overtaken by Parkinson's and related medical conditions, to Farmington to reside at Edgewood Manor until his death in 1998. After selling their Millbrook home, Elizabeth moved to Kingfield in 1996 to live with her daughter Susan. In addition to a short stint writing a column for the local paper, The Irregular, Elizabeth enjoyed reading, writing her monthly family newsletter of nearly 50 years, rocking on the porch overlooking the Carrabassett River as it cascaded over the dam in front of the house, and keeping track of the traffic and neighbors.

Graveside memorial services will be held on Sunday, Sept. 10, at 11 a.m. at the Readfield Center Cemetery in Readfield, followed by a gathering at her nephew's Joseph Saunders' home nearby. In lieu of flowers, memorial donations may be made to the World Wildlife Fund, 1250 Twenty-Fourth Street, NW, PO Box 97180, Washington, D.C. or to Bates College, 2 Andrews Road, Lewiston, ME 04240-6028 or to a charity of one's choice.

Connect with Gina
Amazon Author Page
Milliron: The Biography
www.gmcknight.com
www.mondaycreekpublishing.com
Through captivating, powerful, and emotional anecdotes, we celebrate the life of Dr. Abbott P. Smith. His biography takes the reader from smiles to laughter to empathy and tears. Dr. Smith gave us compelling lessons learned from animals; the role animals play in the human condition, the joy of loving an animal, and the awe of their spirituality. A tender and profound look into the life of a skilled veterinarian.
at August 03, 2020 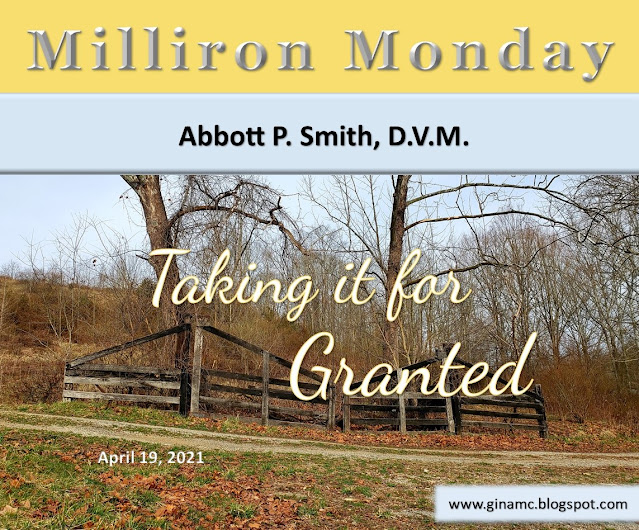