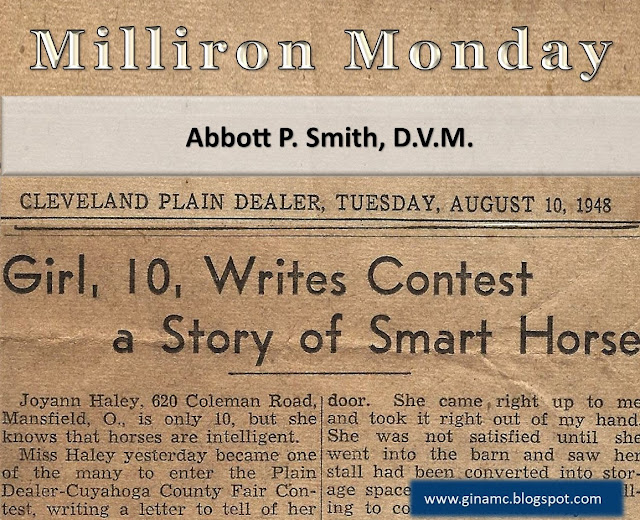 Welcome to Milliron Monday where every Monday we celebrate the legacy of Pete Smith, D.V.M., and  Milliron: Abbott “Pete” Smith, D.V.M. The Biography (Monday Creek Publishing 2017), including his wife Jody (1938-2021). Pete, a well-known veterinarian in southeast Ohio, and Jody lived life to the fullest. They continue to motivate and inspire.
August 1948, the Cleveland Plain Dealer and the Cuyahoga County Fair sponsored a writing contest. Jody's entry was about a horse. The newspaper ran a portion of Jody's story, but when Jody and I talked about it (several years ago), she couldn't remember who actually won the contest. I am hoping that the entire story is saved somewhere and we will find it in Jody's stack of papers (as she saved everything). But as of this writing, we haven't found it.
Girl, 10, Writes Contest a Story of Smart Horse
Joyann Haley, 620 Coleman Road, Mansfield, O., is only 10, but she knows that horses are intelligent.
Miss Haley yesterday became one of the many to enter the Plain Dealer-Cuyahoga County Fair Contest, writing a letter to tell of her experience with a horse named Babe.
"I was trotting on an old black mare named Babe," she writes. "When I tried to brush a fly off her mane, her head went down and the next thing I knew I was sitting on the ground with one foot caught in the stirrup. Babe stopped as though she knew that if she kept on trotting she would have kicked me. Although Babe isn't pretty, I think she is plenty smart and I am glad she is."
Entries continue to arrive daily from scores of towns and cities. One came from Florida. Cash prizes and tickets for the 52d Cuyahoga County Fair at Berea, Aug 19 to 22, are being prepared for the winners. The most interesting letter in the opinion of the judges will win $25 for the writer.
The article continues, sharing two more intriguing entries, but Jody's entry won the headline. 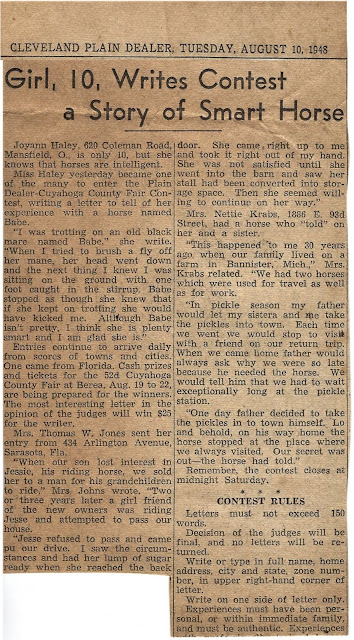 Connect with Gina...
Milliron Facebook Page
Amazon Author Page
Milliron: The Biography
www.gmcknight.com
www.mondaycreekpublishing.com
Through captivating, powerful, and emotional anecdotes, we celebrate the life of Dr. Abbott P. Smith. His biography takes the reader from smiles to laughter to empathy and tears. Dr. Smith gave us compelling lessons learned from animals; the role animals play in the human condition, the joy of loving an animal, and the awe of their spirituality. A tender and profound look into the life of a skilled veterinarian.
at July 12, 2021

Haydenville: A Small Town with a Big Story by Patty Carr Horn 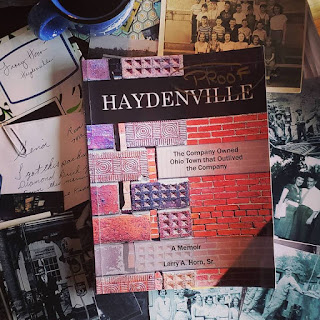