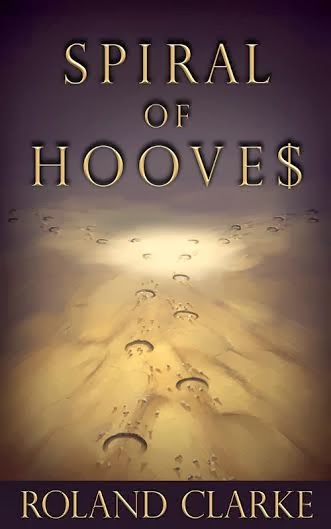 Roland Clarke is a retired equestrian journalist and photographer, who used to be a regular contributor of articles and photos to various equestrian media. In 2000, he was diagnosed with multiple sclerosis, which clipped his wings as he was unable to meet deadlines so easily and found it increasingly hard to attend equestrian events.

Roland Clarke’s debut novel, Spiral of Hooves, is a thriller that will leave you feeling exhilarated. Something of an exposé on the competitive horse riding community, Roland’s beautiful prose will leave you romancing nature. Read this exciting novel and follow Armand Sabatier’s journey in trying to forget his painful past by creating a new life for himself on a beautiful stud farm, only to be lured by the need to uncover truths and to protect the innocent, tumbling directly into the hazards of trust, friendship, and love.

Roland lives in Kent, England with Juanita and their two cats Willow and Kefira.  On his website, Writing Wings— www.rolandclarke.com — he signs his Blog as The Silver Scribbler, a clue to his age and hair.

When did you realize you wanted to become a writer?

Although I liked creating stories in my head as a child, I didn’t start to write them down in an organized way until my teens, and only then thought that perhaps one day others might read them. However, I first thought about becoming a journalist when I was nearly twenty and soon after that got a job as a sub-editor at The Field magazine.

As an equine writer, do you have a favorite equine anecdote?

As an equestrian journalist and photographer, I covered various disciplines but primarily eventing and driving. Normally I remained spectating to do my scribbling but I was invited to experience the thrills of driving close up. I rode as a passenger for the marathon – cross-country phase – with British Team driver Pippa Thomas at Lowther and Brighton events. It was a chance to see the amazing skill and teamwork needed to guide four horses and a carriage through the tight obstacles. And all from what competitors call ‘the suicide seat’ – if the carriage crashes, the passenger has to make a fast exit… or there is the theme for another equine thriller. There are other stories I could tell from fallers to mobiles lost in port-a-loos, but maybe another time.

Do you have a favorite encounter with a horse?

Certainly not those that have stepped on my toes while I interviewed their rider. Anyway, in 1995, with a friend, I created the South East Eventers League in the South East of England, a season-long rankings competition that is still running. The first winner, Vicky Collins, offered to get me back on a horse after some years confined to two feet. Maybe A Cracker, a 15h 3 mare was well-bred by Welton Crackerjack, and a joy to ride, boosting my confidence in my rusty abilities as we rode in the sand school and around the lanes. Vicky competed the mare for a short while, then a friend of mine, who is now a well-established journalist ended up buying her. So I used to see the mare out competing for many years, and joked that if the mare was moody then it was my fault.

Do you have a favorite celebrity horse?

If I was confining myself to celebrity sport horses, then it would have to be the iconic grey Engish racehorse Desert Orchid. http://www.famousracehorses.co.uk/dessie/dessie.htm. But as a writer I would have to choose another grey, Shadowfax from my favorite novel J.R.R. Tolkien’s The Lord of the Rings http://lotr.wikia.com/wiki/Shadowfax.

Why did you switch from writing horses to crime novels?

I had already started writing my first novel while I was an equestrian writer. However, when I retired in 2005, due to ill health – multiple sclerosis - I focused on my first novel, Spiral of Hooves, a mystery thriller set against the eventing world that I had covered as a journalist. (Novel details below). Naturally, the leading lady, Carly Tanner rides two grey mares.

Dreams seem to provide a lot of inspiration for my ideas. Trying to maintain the thought process is hard, especially when multiple sclerosis causes memory lapses. I find that I have to scribble even stray thoughts down if they are to be of any use. I have various notebooks on the go, one for each novel, one for blog ideas, and one for random inspirational scribbles. Pacing and small goals keep me going each day, but I can have bad non-productive ones. Relaxation is also important, and rewarding myself playing online fantasy games can be better than chocolate.

Who is a favorite character of your own creation?

Difficult as I don’t want to upset any of them, especially the villainous antagonists. Favorite would have to be the shaman Coryll created for the fantasy element of my Gossamer Steel series. She was a challenge to develop as she is mixed race – elf-Sami – and has an alter-ego that makes her feel possessed. Her best quality is the relationship with her Akhal-Teke cross mare Windsong.

I am currently working on the Gossamer Steel series, which comprises a cyber-crime mystery and some fantasy/sci-fi short stories and novellas. Gossamer Steel is an online game that is central to the cyber-crime being uncovered in the novel. The shorts and novellas are set in the world envisaged in the game. However, there are sequels to Spiral of Hooves in the pipeline: I’ve done the first draft of Tortuous Terrain, set against endurance riding in the US, and have a rough idea for Suicide Seat, set against carriage driving, of course.

Do you have advice for novice writers?

Never give up, keep writing and reading because that’s the key to learning your craft. Avoid writing without some sort of map if you can; but it only needs to be a rough guide not a fixed itinerary.

List 10 things that people may not know about you...

I am a quarter Chilean as my maternal grandmother was from Chile.

I went to Eton College, but was asked to leave because I was not up to the right standard = I was making their educational statistics look bad.

When I was at college in Canada I considered joining the Royal Canadian Mounted Police, but instead became a journalist.

While in Canada I went on a white-water expedition in the Yukon. Nearly thirty years later I floated down the Boise River in Idaho, but with minimal white-water and human crutches.

When I started taking equestrian photography I earned the nickname CET, because of the maple leaf badge with those initials = Canadian Equestrian Team.

The fruit & vegetable wholesale business that I ran was in danger of turning to compost when I closed it down.

I hate roller-coasters and get so terrified that I’ve been known to bite. Suicide seat in a marathon carriage is way less scary.

I love the smell of fresh coffee but can’t drink it. Instead I drink lemon water.

Fear of flying is an irrational thought that won’t leave me, even if I know what all the noises are. Best way to fly is with my own wings or on a mount in a Massive Multi-player Online Role Playing Game.

Most of my MMORPG alter-egos are far sexier than I am, but maybe that is because they are female.

~ ~ ~
In Canada, researcher Armand Sabatier witnesses what could be the murder of groom Odette Fedon, but traumatic images from his past smother his memory, and a snowstorm buries the evidence. Harassed by nightmares but fighting through them, Armand remembers the crime a few months later. By then he is in England, where he is dragged into a plot involving international sport horse breeding.
Suspecting everyone around him, Armand is forced to brave the past that he has kept buried. But what made Armand leave France? Where did he learn to survive and fight for justice? Why is the English rider Carly Tanner treading the same path as the first victim, Odette?

If you are tempted to read more murderous mystery, visit: http://rolandclarke.com/spiral-of-hooves/

Thanks Gina, I enjoyed being interviewed. Looks really good. All the best everyone.

An awesome interview, Roland! Thanks for sharing. Best wishes always!

Just come here to ride and write with the new blogs and the new poems for the better writing area. You can check it and can enjoy the international blog with this system which is a great thing for your help. You can also find the new publications here.

There is story everywhere and you just have to take the story to publish that on read more for the new students of the college.

If you have that courage with you, you can share your stuff with the rest of the world and can share http://research.proposalwritingservice.com/ with others as well.

With the special section of the Amy Bartol you can get the nice action which can be more good for you. Just find the link with http://www.bestcapstoneprojects.com/capstone-project-title-generator/ and enjoy the session of the riding and writing with this post of the happiness.